Our Association was created by a group of Bierzo friends in love with “The Way to Santiago” after having walked it by the great majority of us.

On the 12th of March of the year 1.987, the Statutes were legalized, and on the 23rd of June of the same year the First General Meeting was held. Their offices are in the ground floor of 4 Holm Oak Square.

The Board of Directors and the first members belonged to the following background: teachers, doctors, painters as well as lord mayors from El Bierzo such as Molinaseca, Cacabelos and the famous manager of the Pilgrim Home, Mr. Jato.

Nowadays this Association has 130 family membership, in other words, 600 members and a Board of Directors composed of 12 members: 1 chair person, 2 vice presidents, 1 secretary, 1 under-secretary, 1 treasurer, 1 under-treasurer and 5 members of the committee who meet at least once a month.

Regarding the Pilgrim Homes, the first pilgrims were lodged in the parish church of La Encina, a shelter with 25 beds and basic facilities, many of which were already attended by priests of La Encina Church before the Association was founded.

Throughout these 17 years of our Association have been attended shelters in Rabanal del Camino, Molinaseca and 2 rebuilt shelters in Ponferrada and Foncebadón.

Help has also been given in various forms, human and economical support as well for the shelters in Manjarín, El Acebo, and Camponaraya-Magaz.

During the Holy Years of 1993 and 1999, Not only has El Carmen Camping for Pilgrims been attended but The J.T Sports Pavilion, José Arroyo Pavilion , Secondary School Gil Y Carrasco, and the Nursery Centre in Cuatrovientos, as well.

The Association has also participated in Pilgrim homes of new construction together with Rabanal del Camino, “Gaucelmo”, St James Confraternity of London and San Nicolas de Flue and the parish of La Encina from Ponferrada.

Two mansions have been restored in Ponferrada as refuge for pilgrims both being named as “Alberguería Virgen de la Encina”, one of them in Plazoleta del Temple with the capacity for 100 pilgrims and the other one in Plaza de la Encina, for 92 pilgrims.

Since 1993 the Information Bureau for the Assistance of Pilgrimage, depending on the National Association Federation of Friends of The Way To Santiago manages it. Since 1999 another office for information on El Camino de Santiago has been opened and depending on The Town Hall of Ponferrada, this office is also attended by two employees belonging to our Association.

The Association attends numerous congresses dealing with El Camino de Santiago all over the Spanish territory as well as abroad. At these congresses participators send their lecturers to these meetings.

Several persons have received homage for their outstanding participation in El Camino de Santiago and among the most outstanding are, the German pilgrim, Heinrich Krause, who died of a bicycle accident in El Acebo; the Fin pilgrim, Jouko Tyyri, and four other pilgrims who died in a coach accident during the pilgrimage organized by the Diocese of Astorga in the year 1999. All of them are remembered in monuments where the accidents occurred.

Other homage to be emphasized were those given to Don Jesus Garzón Alonso upon his retirement who was a great Pilgrim Home manager and a lover of El Camino de Santiago as well as Don Elias Valiña San Pedro.

Dealing with cultural activities we are a prolific Association organising The Pilgrim’s Week, conferences, lectures, discussions, round tables and exhibitions.

Other activities which this Association also perform are painting, photography, handicrafts, philately, books, theatre and lectures in schools.

The annual magazine, “Osmundo”, (ten issues published); the book “Pilgrims and Poor People in Medieval Bierzo” and also a thematic magazine, “The Fountains of El Camino de Santiago On The Way In El Bierzo”; brochures , maps, as well as articles
that were sent in the Holy Year, 1999, to the weekly magazine ,Nuevo Jaen, consisting on 14 articles sent weekly to that city in Andalusia .

The Association always attended to Interviews in different newspapers, radio broadcasting and television whenever required And we must emphasize on the three programmes on El Camino en el Bierzo through the Galician Television.

A pilgrimage to Santiago is annually organised in three different ways: on foot, by bicycle or by coach.

We have assisted to “The Ages Of Man” (Las Edades del Hombre) held in Castile and Leon , Galiza No Tempo (“Galician in Time”) and Asturias.

In the year 2000, The Jubilee Year, it was granted by the Church of Santa Marta in the city of Astorga.

Every year the Festival of The Apostle is celebrated on the 25th of July with a procession to La Cruz de Ferro (The Iron Cross) and where a hermitage has been also built in cooperation with La Casa de Galicia.

The Association was also present at the Feast of Charlemagne, in the German city of Aquisgran , in the Holy Years, 1993, 1999,and 2004 and visiting other associations in France, Germany, Holland, Belgium and Luxembourg.

The stages of El Camino de Santiago on its way through El Bierzo is another of the activities which is held every year.

We maintain relationship with other associations in Spain, Europe and America accommodating and giving support to many of them on their way through Ponferrada.

We are also always present every Holy Year at the inauguration and closure of The Door Of Forgiveness (Puerta del Perdón) in Villafranca del Bierzo.

We have laid the Foundation Stone in the Pilgrim Homes in Ponferrada, La Faba, Foncebadón and Jato, in Villafranca del Bierzo, among others.

The belfry of the Church of Rabanal del Camino has been restored with the collaboration of Saint James Confraternity from London.

We are also promoting a Monument at El Acebo, in the trunk of a tree of three meters tall and two meters wide, besides the one also built in this village in memory to a pilgrim who died during his pilgrimage.

The restoration of a stone cross, practically lost, not far from the Pilgrim Home in Ponferrada.

The Council of Ponferrada has also been asked to build a monument in honour to the pilgrims and where it should be placed, urging La Junta de Galicia to donate to La Casa de Galicia in Ponferrada, which they tried to install in the place where we had previously chosen. Finally today is a reality.

The Prize “El Peregrino” has been awarded throughout these years since 1993 to people and institutions who have been outstanding in relation to the pilgrimage, The Way To Santiago or to our Association.

We are also a member of the National Association Federation. Our actual Chairperson is a member of the Board Of Directors, Permanent Staff and a vocal to Castile and Leon, The Promotion of El Camino de Santiago, Junta de Galicia, Arch-brotherhood of the Apostle and the Town Hall of Ponferrada.

The following prizes have been received :

We also honour various members with a Mass celebrated for deceased members and pilgrims in general with a medal and a diploma accrediting their belonging to the Association. and afterwards the Annual Banquet.

In The Holy Year 1999 The Holy Week Brotherhoods from all over Spain, in a Congress held in Zaragoza, the coordination of a massive pilgrimage to Santiago de Compostela was granted the honour of its organisation to this Association .
In the month of July of the year 2004 a pilgrimage with more than 1000 pilgrims was organized by The Ponferrada Town Hall.

The Association also organized two Congresses for Pilgrim Home Managers in the years 2000 and 2004.

The National Federation of Associations has deposited its confidence in this Association in order to celebrate in the year 2005 the 7th International Congress of the Jubilee Associations which will be celebrated on the following days: 20th, 21st , 22nd and 23rd of October in the city of Ponferrada. 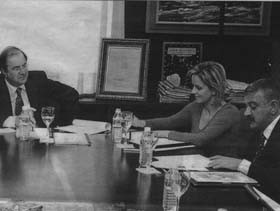